Shakespeare is considered by many to be the greatest playwright of all time and is possibly the most famous playwright in the English-speaking world.

Born in Stratford-upon-Avon he was also probably educated there however, very little is known of his early life. The next documented event in his life is his marriage in 1582 to Anne Hathaway. The couple had a daughter the following year and twins in 1585. Another gap followed (referred to by some scholars as 'the lost years') with Shakespeare only reappearing in London in 1592, when he was already working in the theatre.

Shakespeare's acting career was spent with the Lord Chamberlain's Company, which was renamed the King's Company in 1603 when James succeeded to the throne. The group acquired interests in two theatres in the Southwark area of London, near the banks of the Thames - the Globe and the Blackfriars.

Shakespeare's poetry was published before his plays, with two poems appearing in 1593 and 1594, dedicated to his patron Henry Wriothesley, Earl of Southampton. Most of Shakespeare's sonnets were probably written at this time as well. Records of Shakespeare's plays begin to appear in 1594, and he produced roughly two a year until around 1611. Some of his most famous tragedies (including Macbeth) were written in the very early 1600s. The first collected edition of his works wasn't published until 1623, some 7 years after his death.

Measure for Measure is believed to have been written between 1603 to 1604, eith the first recorded performance in 1604

Shakespeare spent the last five years of his life in Stratford, and he was buried in the Holy Trinity Church there.

The city is riddled with corruption. Vice of all kinds runs unchecked. Something must be done. What is needed is the sharp sting of the law to bring people into line. So Duke Vincentio appoints his morally upright deputy Angelo to do the clean-up for him. Only when Angelo is confronted with a young nun who is desperate to help her imprisoned brother, his own morals prove startlingly slippery. Shakespeare's inky dark comedy explores law and justice, sex and hypocrisy, in a world that has lost its moral compass.

To hear an exciting trailer, click on this link!

WHY AN ALL-FEMALE PRODUCTION?

The practical reason is that only about 14 percent of Shakespeare's characters are female. Some of the roles are excellent for performers - Isabella in this play being one of them - but there are few of them. As a result, few women get the chance to be fully part of a Shakespeare production. Another reason is that Shakespeare himself was fascinated by gender ambivalence. Having no choice but to cast young boys in his female roles, he relished the opportunity to dress them up as girls disguised as boys being made love to by girls played by boys. In this play, the terrific seduction scene in the middle would have had a very young boy squaring up to a mature man playing Angelo. So why not turn all that on its head? Also, this is a play dominated by male attitudes to women. It reflects a society in the midst of a moral panic, obsessed with sex and its consequences, fearful of disease. And all that bad news is of course women's fault. So why not take a look at that world through female eyes?

My intention is to portray an acting company (that happens to be female) staging a production of Measure for Measure. They are actors in a role first, women second. That is in fact true of any actor - you do not have to be your role in order to play it. The setting will be almost like rehearsal room - the 'set' will be made up of costume rails that can be reconfigured to make different spaces. The company will assemble on stage at the same time as the audience, as themselves, coffee in hand, mobile to ear. They will gradually take on their roles, adopting indicative bits of costume, remaining visible throughout.

Two important decisions I want to make as part of the rehearsal process itself: exactly what costume to adopt, and how far to 'disguise' as male? (But there will be no tights and no thigh slapping, definitely.)

That ending's a stinker.

Why does the duke remain disguised for so long, prolonging the heroine's suffering, whom he then, effectively, publicly makes a fool of? And then proposes marriage!

The play could be 10 minutes shorter if he'd only un-mask when any normal person would.

Jacquie Penrose for The Bench gives Daisy Dawes as Isabella a clear 'What-Choice-Do-I-Have?' exit - and rightly so in response to Megan Green's frankly lecherous duke.

Hang on. Megan Green as the duke?

Oh, yes. The Bench are doing what they do so well and taking risks, being creative, because Penrose has opted for an all-female cast. There's good - and clever - double-casting, too. Jane Swindells as Angelo (the baddie) and Claudio (the goodie) works very nicely.

A few of the cast feel the need to illustrate with unnecessary gesture - let Bill's language do more of the work for you - and there's a good deal of speaking to the audience rather than the other actors on stage but - you know what? I'll live with that just to celebrate the risks this company take. 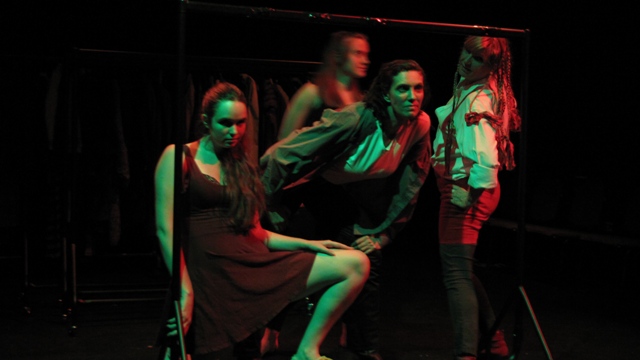